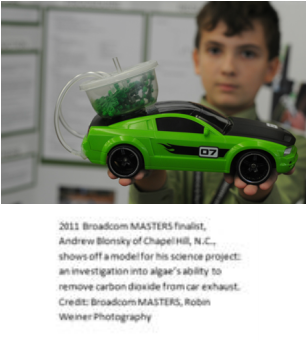 2011 Broadcom MASTERS finalist, Andrew Blonsky of Chapel Hill, N.C., shows off a model for his science project: an investigation into algae’s ability to remove carbon dioxide from car exhaust.Broadcom MASTERS, Robin Weiner Photography
Forget the baking-soda volcano. With research ranging from the power of natural mosquito repellent to the adaptability of reef-building corals, a new crop of young science fair students are leaving old-school projects in the dust.In September, 30 of these middle schoolers will head to Washington, D.C., to take part in the final stage of the Broadcom Math, Applied Science, Technology and Engineering for Rising Stars, or MASTERS, program. This is the second year of the national science competition, which is sponsored by the Broadcom Foundation.

Announced on August 29, this year’s finalists include one 12-year-old from Massachusetts who figured out how to use the ocean’s waves to generate electricity. Another from California pitted an intelligent game-playing computer against human doctors and professors. But the competition doesn’t just consider the creativity and scientific merit of a student’s project; it also judges each finalist’s ability to solve problems, communicate and work in teams.

While in Washington, the 30 sixth-, seventh- and eighth-grade finalists will compete in a series of project showcases, individual interviews, and intellectually grueling team trials designed to test each student’s math and science mettle. 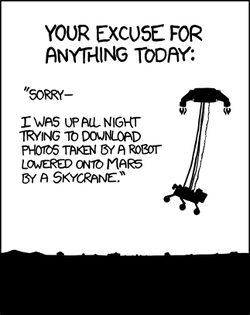 This is a link to the Nasa Homepage for Curiosity, the most recent MARS ROVER!!
http://mars.jpl.nasa.gov/msl/

Check out Raw Images from the Martian Surface, updates on the rover's progress on Mars, and so much more!!!

An artist depiction of the planet GJ667Cc and the three stars it orbits Carnegie Institution / UCSC
The search for exoplanets, or worlds orbiting other stars, is evolving so fast that discoveries that seemed exotic just a few months ago have become commonplace. Multiple-planet solar systems? Astronomers expected to find just a handful; now we know of more than 200. Planets orbiting double or even triple stars? It was big news when just one was announced back in September; we've already got several more examples in hand. In short, the unexpected is something planet hunters have learned to expect — and in most cases, these surprises have tended to expand the possibilities for finding worlds where life might thrive.

It's just happened again: astronomers from the Carnegie Institution of Washington and the University of California, Santa Cruz, writing in the Astrophysical Journal Letters, have announced the discovery of yet another new world that defies everyone's expectations. Not only does the new planet orbit one of the suns in a triple-star system — rare enough in itself — but the stars in this system have surprisingly low levels of the heavy elements planets are made from. Theory suggests that such stars shouldn't form planets in the first place, so if this isn't a fluke, there may be many more planets in the Milky Way than anyone thought. .................
Read more @ http://www.time.com/time/health/article/0,8599,2106061,00.html#ixzz1lK63EKcq

Two teens send a Lego man into near space

LATimes: January 27, 2012
Two Canadian high school students have successfully launched a Lego man almost 80,000 feet above sea level--high enough to capture video of the plastic toy hovering above the curvature of the Earth.

Now the results of their experiment have gone viral, racking up more than 600,000 views on YouTube in just two daysand inspiring the young engineers to make their small astronaut his own Facebook page--Lego Man in Space.

The Toronto Starreports that the two teens, Matthew Ho and Asad Muhammed, were inspired to do the project about a year and a half ago when Ho saw a YouTube video of MIT students who sent a balloon to near space. Ho wanted to see if he could do it too.

The friends spent four and a half months working on the project, mostly on Saturdays. In a video interview with the Star, they said the hardest part was making the parachute, which they decided to hand-sew, even though neither of them had any sewing experience.

They also constructed a lightweight Styrofoam box to carry three point-and-shoot cameras, a wide-angle video camera and a cellphone with a downloadable GPS app. They purchased a professional weather balloon for $85 online. The helium that would lift it up came from a party supply store. For launch, they put two mitten warmers in the Styrofoam box to keep the cameras working at that altitude. The whole project cost them about $400.

After the balloon was constructed, the two waited until weather conditions would ensure that the Lego man would land in Canada and not somewhere in the U.S. because they didn't want to take their chances with U.S. Homeland Security, the Star reports.

Ho and Muhammed estimate that it took their balloon craft one hour and five minutes to climb 80,000 feet before it finally popped. The descent took a little more than 30 minutes.

Besides online notoriety, the two also received a congratulatory note from Lego. 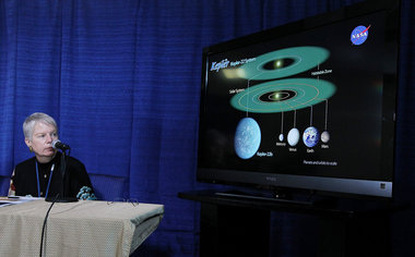 The planet is smack in the middle of what astronomers call the Goldilocks zone, that hard to find place that's not too hot, not too cold, where water, which is essential for life, doesn't freeze or boil. And it has a shopping mall-like surface temperature of near 72 degrees, scientists say.

Read more about the NEW PLANET HERE: http://www.nj.com/news/index.ssf/2011/12/new_earth-like_planet_discover.html
Brought to us by Fatimzahra and Misael in 6U 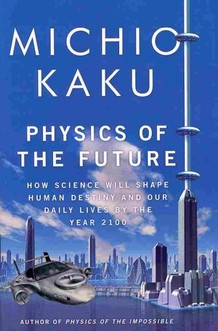 _November 29, 2011
Imagine being able to access the Internet through the contact lenses on your eyeballs. Blink, and you'd be online. Meet someone, and you'd have the ability to immediately search their identity. And if your friend happens to be speaking a different language, an instantaneous translation could appear directly in front of you.

That might sound farfetched, but it's something that might very well exist in 30 years or less, says theoretical physicist Michio Kaku. 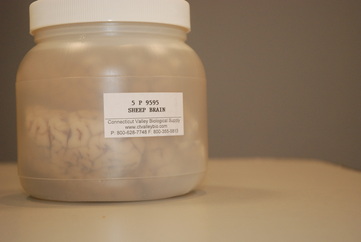 Have you ever wondered why zombies stagger around with their arms stretched out, clamoring through cemeteries in search of victims? And how come they refuse to talk, just moaning from time to time. And why are they so hungry (mainly for human brains!).

The answers to these eternal questions can be found in the brain! Harvard psychiatrist and zombie fanatic, Dr. Steven Schlozman, uses the conceit of a zombie brain to help explain how the real human brain works. ..... 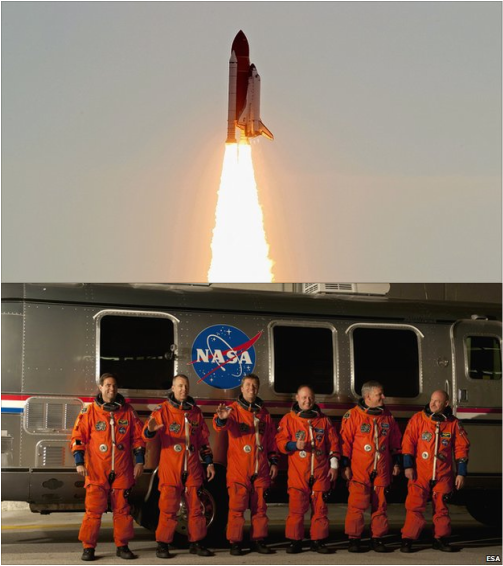 The shuttle over the Kennedy Space Center and the crew greet the crowds before boarding the shuttle
The US space shuttle Endeavour has launched on its final mission.

Its thunderous rise into a bright morning sky over the Kennedy Space Center in Florida was watched by hundreds of thousands of spectators.

Among them was Endeavour commander Mark Kelly's wife, Gabrielle Giffords, the Arizona politician shot in the head by a gunman in January.

Doctors were satisfied enough with her recovery to allow her to travel to Kennedy to see her husband's departure.

"This mission represents the power of teamwork, commitment and exploration," the commander said in a radio call to launch controllers moments before lift-off. "It is in the DNA of our great country to reach for the stars and explore. We must not stop."

It is now on a path to rendezvous with the International Space Station (ISS) on Wednesday.

The ship will deliver a $2bn particle physics experiment, known as the Alpha Magnetic Spectrometer (AMS), and a tray of critical spare parts.

On Endeavour's return, the only active ship left in the US space agency's (Nasa) shuttle fleet will be Atlantis.

It should undertake its final mission sometime in in July.

"Today's final launch of Endeavour is a testament to American ingenuity and leadership in human spaceflight," Nasa Administrator Charles Bolden said in a statement.

"As we look toward a bright future with the International Space Station as our anchor and new destinations in deep space on the horizon, we salute the astronauts and ground crews who have ensured the orbiter's successful missions.

"The presence of Congresswoman Gabrielle Giffords at the launch inspired us all, just as America's space programme has done for the past 50 years."

On completion of the 30-year shuttle programme, America will use Russian Soyuz capsules to fly its astronauts to the ISS.

A number of US national commercial carriers are expected to enter into service around the middle of the decade.

Nasa will then buy seats in these astronaut "taxis". The arrangement will represent a major change in the way the agency does business. No longer will it own the vehicles it uses to go to low-Earth orbit.

This servicing plan should free up resources for Nasa to build an astronaut Space Launch System capable of travelling beyond the station, to the Moon, asteroids and to Mars.

Endeavour was built to replace the Challenger ship which was lost, along with her crew of seven, in a catastrophic accident in 1986.

This final flight is the vessel's 25th overall, having already clocked a cumulative distance in space of 166 million km - an expanse just greater than that which divides the Earth and the Sun.

And yet, the information in this model is the sharpest view we have of how gravity varies across the Earth.

The globe has been released by the team working on Europe's Goce satellite.

It is a highly exaggerated rendering, but it neatly illustrates how the tug we feel from the mass of rock under our feet is not the same in every location.

Gravity is strongest in yellow areas; it is weakest in blue ones.

Technically speaking, the model at the top of this page is what researchers refer to as a geoid.

It is not the easiest of concepts to grasp, but essentially it describes the "level" surface on an idealised world.

Look at the potato and its slopes. Put simply, the surface which traces the lumps and bumps is where the pull of gravity is the same.

Described another way, if you were to place a ball anywhere on this potato, it would not roll because, from the ball's perspective, there is no "up" or "down" on the undulating surface.

It is the shape the oceans would adopt if there were no winds, no currents and no tides.

The differences have been magnified nearly 10,000 times to show up as they do in the new model.

Even so, a boat off the coast of Europe (bright yellow) can sit 180m "higher" than a boat in the middle of the Indian Ocean (deep blue) and still be on the same level plane.

This is the trick gravity plays on Earth because the space rock on which we live is not a perfect sphere and its interior mass is not evenly distributed. 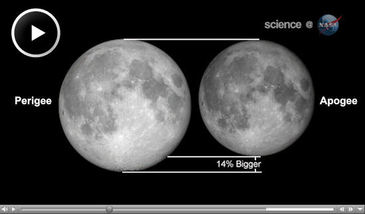 On March 19th, a full Moon of rare size and beauty will rise in the east at sunset. It's a super "perigee moon"--the biggest in almost 20 years. "The last full Moon so big and close to Earth occurred in March of 1993," says Geoff Chester of the US Naval Observatory in Washington DC. "I'd say it's worth a look."

Full Moons vary in size because of the oval shape of the Moon's orbit. It is an ellipse with one side (perigee) about 50,000 km closer to Earth than the other (apogee): diagram. Nearby perigee moons are about 14% bigger and 30% brighter than lesser moons that occur on the apogee side of the Moon's orbit. 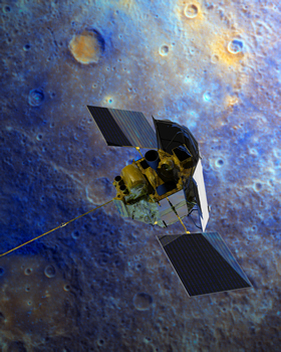 Blue Craters of Mercury
On March 17, 2011 (March 18, 2011, UTC), MESSENGER became the first spacecraft ever to enter Mercury's orbit. The probe will continue to orbit the planet once every 12 hours for the duration of its primary mission. The first few days after orbit insertion will be focused on ensuring that the spacecraft systems are all working well in the harsh thermal environment of orbit; this interval is known as the orbital commissioning phase. On March 24, 2011, the instruments will be turned on and checked out, and on April 4, 2011, the science phase of the mission will begin and the first orbital science data from Mercury will be returned. For additional information, read Mercury Orbit Insertion and Station Keeping.